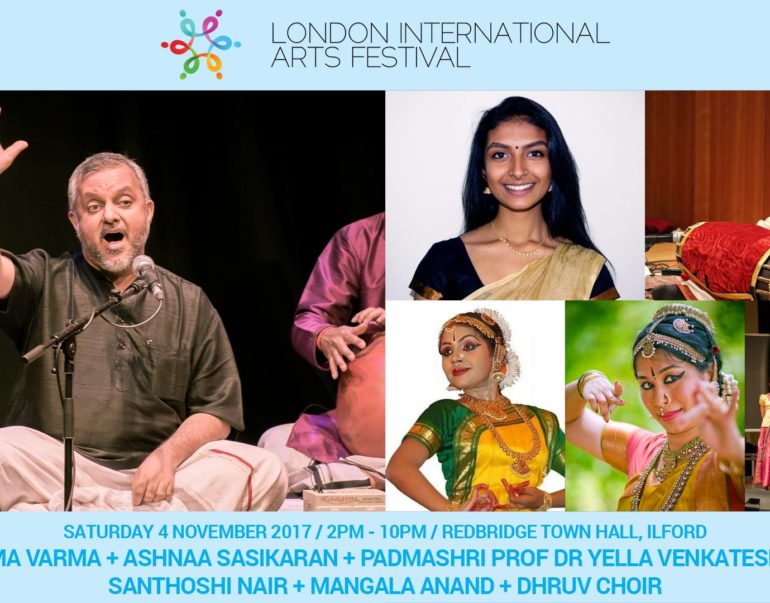 2.30pm – 3.00pm – Dhruv Choir
Dhruv Choir, have been presented since 2004 and have nearly offered 85 concerts to date, comprises of children singing Sanskrit chants with western orchestration directed by Jyotsna Srikanth

3.00pm – 3.45pm – Mangala Anand, USA – Bharathanatyam dance
Mangala is a senior disciple of Guru. Padmini Ramachandran from the Vazhuvoor style of Bharatanatyam. She was initiated into dance at a very tender age 8. With a performance career of over 20 years, Mangala has several performances to her credit both at prestigious festivals both India and in USA.

Her new artistic work “Leela” was presented as part of the world dance series by the esteemed -The Center for Performing Art in Carmel.She is a proud presenter of “Ranga Shankaraa” an Annual Music and Dance Festival in the Midwest, USA.

Mangala presents Shakti Samagama – Confluence of the Divine. This presentation is an attempt to bring out a few identities from the infinite, Janani – Mother to the protector, Devi – Lover of the celestial and Shakti – Protector of the universe

4.00pm – 4.30pm – Santhoshi Nair, UK – Contemporary Bharathanatyam Dance
A scintillating performer in the field of Bharatanatyam. Santosh G. Nair is a gifted young dancer . A young Management consultant and a scintillating bharatanatyam dancer Santosh G.Nair who marks her origin from kerala but is brought up in Hyderabad, India is c urrently pursuing her PhD from Liverpool Hope University in the subject of Bharatanatyam and it’s connection to spiritual consciousness. Santosh has many awards to her credit including the Nat tonal Balashree award. She is currently training numerous students in London.

5.00 – 5.45pm – Padmashri Prof Dr Yella Venkateshwara Rao presents Colours of Rhythm
Yella Venkateswara Rao, a legendary south Indian percussionist,presents a mridangam solo recital. He was featured in the Guinness Book of World Records for playing mridangam continuously for 36 hours. In 1969 Rao, elevated Mridangam from its status of an accompaniment to the level of a solo instrument. He is a former Asthana Vidwan (State Scholar) of the Government of Andhra Pradesh. The Government of India awarded him with the civilian honour of the Padma Shri in 2007. He is known for his unique, crisp style of playing.

6.00 – 6.45pm – Aashna Sasikaran, UK – Carnatic Vocal Recital
Ashnaa Sasikaran is a very keen and passionate young British Asian Carnatic singer. She is currently learning under the tutelage of Sri Vamshikrishna Vishnudas. She completed her vocal Arangetram in 2014, with the guidance of Smt. Renuka Shrianandha. She has performed numerous solos and in some prestigious venues like the Royal Concert Hall.

Ashnaa has completed grade 8 in western violin and is working towards her diploma. She is also working on completing grade 8 in Bharatanatyam and is the leader of Sabrang, the National South Asian Youth choir housed by Milapfest. She is currently in year 12 at Aylesbury High School.

7.00 – 9.30 – Prince Rama Varma, India – Carnatic Vocal Recital
Prince Rama Varma, an eminent Carnatic musician and a member of the Royal Family of Travancore, Kerala is a direct descendant of Maharaja Swathi Thirunal Rama Varma and Raja Ravi Varma. Hailed asthe most exciting prospect to emerge from Kerala in Carnatic music in this period, his music is noted for its strict adherence to tradition coupled with his own charming brand of creativity.
Prince Varma has given concerts all over India and in other countries like USA, UK, France, Germany, Kuwait, Dubai and The Netherlands, to mention a few.